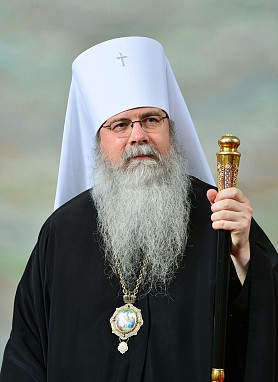 The Most Blessed Tikhon (Mollard)
Archbishop of Washington, Metropolitan of All America and Canada

His Beatitude, Metropolitan Tikhon of All America and Canada was born Marc R. Mollard in Boston, MA on July 15, 1966, the eldest of three children born to Francois and Elizabeth Mollard.

After brief periods living in Connecticut, France, and Missouri, he and his family settled in Reading, PA, where he graduated from Wyomissing High School in 1984.  In 1988 he received a Bachelor of Arts degree in French and Sociology from Franklin and Marshall College, Lancaster, PA, after which he moved to Chicago.

He collaborated with Igumen Alexander [Golitzin]—now Bishop of Toledo and the Bulgarian Diocese of the Orthodox Church in America—in the publication of “The Living Witness of the Holy Mountain” by Saint Tikhon’s Seminary Press.

In 1995, he was tonsured to the Lesser Schema with the name Tikhon, in honor of Saint Patriarch Tikhon, Enlightener of North America. Later that year, he was ordained to the Holy Diaconate and Holy Priesthood at Saint Tikhon’s Monastery. In 1998 he was elevated to the rank of Igumen, and in 2000, to the rank of Archimandrite.

In December 2002, he was named Deputy Abbot of Saint Tikhon’s Monastery.  Two years later—on February 14, 2004—he was consecrated to the episcopacy at Saint Tikhon of Zadonsk Monastery Church.  On May 9, 2012, he was elevated to the dignity of Archbishop.

On November 13, 2012, Archbishop Tikhon was elected Primate of the Orthodox Church in America at the 17th All American Council. 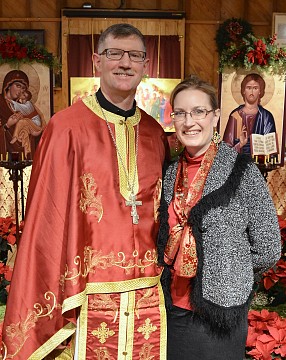 Father Sean Levine started full-time Christian ministry in 1993 upon graduation with a Bachelor of Arts in New Testament Literature from Oral Roberts University. In 1996, Fr. Sean enlisted in the Army as a Chaplain’s Assistant, and was honorably discharged from active duty in January of 2000. He spent the next three years at Asbury Theological Seminary earning a Master of Arts in Theological Studies (2003). Before re-entering active duty in January of 2004 as a Protestant pastor serving as an Army Chaplain during the surge of forces in Iraq, Fr. Sean completed all but six hours of a Master of Arts in Biblical Literature. After three years serving as a Chaplain, Fr. Sean left active duty, having deployed twice to Iraq, to complete his M.A. in Biblical Literature (2008) and to pursue a Master of Divinity at St Vladimir’s Orthodox Theological Seminary in preparation for ordination in the Eastern Orthodox Church.

Fr. Sean was ordained to the Deaconate in March of 2009, and then to the Priesthood, in May of the same year. After graduation in May of 2010, Fr. Sean returned to the Army Chaplain Corps as an Orthodox Priest, this time during the surge in Afghanistan, and he deployed in 2011 to the Kandahar Provence of Southern Afghanistan in order to serve Holy Week and Pascha services for Coalition Forces stationed on and around Kandahar Airfield. The following year, Fr. Sean returned to Southern Afghanistan with 1-17 Infantry Battalion, 2nd Brigade, 2nd Infantry Division, traveling the breadth of the battlespace to serve the Soldiers of his Battalion and the Orthodox Christians stationed throughout Southern Afghanistan. From 2013-2016, Fr. Sean served as Squadron Chaplain for 1-1 Cavalry at Fort Bliss, Texas, and he was selected in 2016 for the Army’s Family Life Chaplain program, which sent him to Fort Hood, Texas (Texas A&M--Central Texas Campus) for a Master of Science in Marriage and Family Therapy (2017).

At present, Fr. Sean serves as the Family Life & Pastoral Counseling Chaplain at Fort Belvoir, Virginia, and he is working on a Doctor of Ministry focused on the Army Chaplaincy’s Moral Leadership Program. He lives in Lorton, Virginia, with his wife, Jennifer, and son, Andrew (13). His son, Ethan (20), attends Blinn Community College in College Station, Texas, in preparation for admission to the Texas A&M main campus. 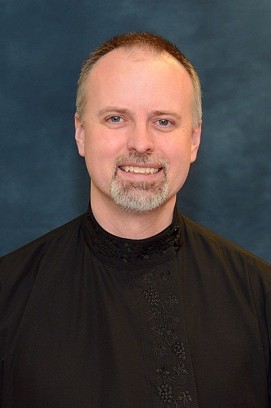 Fr.Dcn. Matthew Prentice
Deacon/Contact Person
mprentice@comcor.net
Deacon Matthew was raised in the Great Plains and Rockies and went back to college at Creighton University in Omaha.  Having received an Air Force ROTC scholarship, Matthew subsequently graduated with a double major in Computer Science and Math, and was commissioned into the US Air Force. He was assigned to the Pentagon and met his future wife Ann in the Washington DC area.  He was very quickly drawn into the Orthodox church and within a few months was serving food at the St Mark annual bazaar that he didn't know how to pronounce and wasn't even certain what it was. The Orthodox church was quite different from his Presbyterian teenage years and yet it was very comfortable and felt right. Matthew and Ann were married at St Mark, have raised their two kids at the church, and he was ordained to the diaconate in October 2012 by Archbishop Alexander (Golitzin).
Deacon Matthew and his family have grown up in St Mark church and love the church and the people.  They also see a need for a canonical parish in Fairfax County.  With that in mind, Deacon Matthew proposed the idea of the Fairfax mission to the Archdiocese of Washington DC Mission Board and found himself joining the mission board.  He is excited for all the blessings and success the mission station has seen so far and looks forward to the growth of the community.
Deacon Matthew serves at St Mark and also serves the Fairfax mission station.
Deacon Matthew has worked at All Covered, a division of Konica Minolta, for 10 years and is an IT engineer on two national teams focusing on efficiency, automation, best practices, and standards.  Matthew, his wife Ann, and their two teenage children, live in Springfield, VA with a red-eared slider turtle and 4 guinea pigs.
Deacon Matthew is fond of saying:
30 years ago if you had told me I would be an ordained Orthodox Deacon, I would have said "what's Orthodox?", "what's a Deacon?", and "there is no way I'm going to be ordained."  You never know what God has planned for you.  Trust God and His plan for you. Juliana Woodill is a choral director in Fairfax County, VA. She grew up singing in the Orthodox Church at her home parish in California and began singing in the church youth choir at age 8. Being surrounded by beautiful choral singing in a church context set her on the path to becoming a conductor. She began teaching in 2009 after she received a Bachelor of Music in Music Education and Musical Theater from Westminster Choir College. She studied conducting with Dr. Joe Miller, and sang with the Westminster Symphonic Choir under the baton of many conducting masters. During her time at Westminster, she conducted the choir at Joy of All Who Sorrow Orthodox mission in Princeton, NJ. She continues this work today as the choral director at the Fairfax Orthodox Mission Station and loves the opportunity to bring the musicianship and skills of the choral world into the church setting. She believes strongly in the importance of beautiful, healthy singing both in church, and in her school choirs.

Juliana has taught music across all ages in Fairfax County Public Schools and currently teaches chorus at Fairfax High School. She adjudicates, clinics and guest conducts choirs throughout the Northern Virginia area. She has presented talks and was a featured conductor at the International Symposium of Orthodox Church Musicians Conference in 2016 and 2018.